Ohai, all. Newsies and so on . . . A short story on the way from Joyland. Publication date TBA, but the little asshole's got a miniature replica of Hiroshima in it. Finished first draft of novel. Have started rewriting it. I've started dicking around with screenwriting, something I've always wanted to do, since my favourite things about storytelling - structure and dialogue - are pretty much what screenplays are. I wrote a TV pilot called Spanked! about an underachieving accountant whose live is turned upside down when his new client turns out to be a dominatrix. I work better with deadlines, so I decided to enter it into a contest. The results are in: Spanked! made the quarterfinals, making it one of the top 25 (out of 300+ entries). Great. Encouraging. Begeinner's luck . . . ? Deets: http://www.scriptapaloozatv.com/winners/
Posted by Andrew M. at 8:38 AM No comments:

The Quarterly is New

I always forget you, little buddy, and maybe soon you'll be left for good, since I'm creeping towards getting a website. Sigh. You'll always have a place in my dark little heart.

Anyway. Updates on the subject of writing . . .


I think that's everything. Well, it isn't everything, but the OTHER THING that's good news hasn't been announced yet, so I can't tell you what it is, but something has been selected for a kind of something prize that comes once a year, like Santa Claus.

Ohai. Here are some things that have been happening / will happen.

Some goodness in the upcoming Spring issue of The New Quarterly, including my short story, "A Perfect Replica of the Sistine Chapel," and my other short story, "The Perfect Man for My Husband," an afterword, in which I talk about where the stories came from and so on, and an author photo that is neither a selfie nor a picture of me naked.

I've been nominated for the Pushcart Prize, so that's sort of a big deal. I've got three stories up for it.

If you're up in Seattle for AWP, The McNeese Review, which has a story of mine in it (and a story of Richard Bausch!), will be released.

Speaking of releasing, I'll be manning the Juniper Summer Writing Institute table at AWP, so stop by and smell my hair. I'm the assistant director and can answer questions about why I don't have any friends.

Updates for the holidays.

One, my short story "Up, Away, Here, Gone," about hot air balloons, solving a mystery, and Claude Levi-Strauss, appears here, in Route Nine, a New England journal affiliated with the UMASS-Amherst MFA program.

I did a reading there, at Flying Object, the nexus of Massachusetts literary stuff this past weekend.

The story's also been taken by the anthology They Have To Take You In, published in the future by Hidden Brook Press.

Two, The St. Petersburg Review is going to be hitting stores in January. It has my story "Remission" in it. Somehow Daniil Kharms is also in the same issue, returning from the grave to haunt us all.

Can't remember if I mentioned this, but The New Quarterly has scooped up "An Exact Replica of the Sistine Chapel," another story, after a million years of rejecting stuff I've sent them. So, you know. Keep on trucking. They'll also be running a blip on their blog about what I'm reading. The answer at the time was The Unprofessionals by Julie Hecht.

EVENT will be running my review of Into the Abyss and Antarctica: An Amundsen Journal, in their upcoming issue. Also apparently poems by Helen Guri, who writes good stuff.

That should do it.

Hello, little blog. I'm writing on you from New England, where I live now. So if you were wondering why you haven't seen me half naked on the street, singing 'Old Grey Mare Just Ain't What She Used to Be' to pay for the outrageously pricey TTC costs in Toronto, it's because I'm here.

I just received a copy of The Pilot Pocketbook, which has a story I wrote in it. I encourage you to buy a copy. The quality of this little fucker is unreal.

Going through proofs for the issue of the St. Petersburg Review. They're publishing my oncology ward romance story. I mentioned this before, but so many of my literary heroes have appeared in SPR, like George Saunders. So. Will keep you posted about that.

Who knows if I can say this, but since I signed the contract, fuck it. The New Quarterly will be publishing my favourite thing I've written in a long time, that I've been trying to write, in one form or another, for like 6 years, dating back to my undergrad. I worked really hard on the story and after being rejected for like 8 years, TNQ has finally decided to accept a story of mine. Huzzah.

There's also the McNeese Review. It's an annual, so I'm not sure when the publication will be out. But the story is about mimes having sex. I know, right?

The Body Electric anthology for and/or press is said to have been completed and will be out soon. It contains "Eat Fist!", which might be the best thing I've ever written, or at least top three. Also, I wrote a book review for EVENT that'll be coming out in their next issue. EVENT is one of my favourite literary magazines in the whole world. They've been so generous 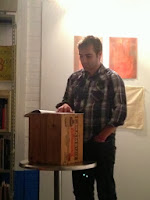 in their support of my writing, I certainly owe them a crapload of hugs, and every time I review for them I'm grateful for all that they've done with me (nominating me for two awards, continuing to fire book reviews my way, even though I'm a complete fuckup and need constant harassment to get things done).

Finally, I've started doing a poem a day on this tumblr blog. You probably know this, but I don't really write poems. But now I do. And it's really rewarding.

I did a reading at Flying Object last night, which is where the picture is from. I read from my story about the weird brother sister thing. You can find it on one my other favourite literary journals in the whole world, Taddle Creek, in its entirely.

If you're reading this from Canada, I'll see you in December / January, when I cross the border and re-enter your lives.

So tomorrow, June 14th, 2013, I'll be reading at the Taddle Creek launch. Details below. You should go, because there's free food and beer. Which is good. Said it in the last post, saying it again . . .

Taddle Creek No. 30 launches Friday, June 14, at the Jet Fuel Coffee Shop, 519 Parliament Street, in beautiful downtown Cabbagetown. As is now the tradition, there will be a barbecue for meat eaters and non–meat eaters alike, and free beer, courtesy of the Good Beer Folks at Steam Whistle. As is also tradition, there will be readings, this time by the Good Literature Folks of Michael Lista, Andrew MacDonald, and the one-and-only Michelle Winters. Doors are at 8:30 p.m.; magazines are five dollars (cheap!).

Ta. Da. Next item, The St. Petersburg Review is going to publish my oncology ward love story, "Remission," sometime in the future. No date on this one. It's crazy, flipping through past contributors and seeing people like Aimee Bender, Josip Novakovich, George Saunders, and Padgett Powell. Drrrrrr. Good stuff. xo.
Posted by Andrew M. at 9:32 AM No comments: