It's been too long, I think. But I always say that. What have I been up to? Working a lot on this novel, which is the last I'll say about that, plus stories, plus, you know, what I do in real life, which is teach high school and freelance as a content development consultant. That's a real thing that's close to technical writing. There, see? We've been dating for so long that I thought it was time for you to get to know me a little better. Since I usually only post here when I have news about my writing, I guess I'll have to share news about my writing. First, and sadly, Other Voices, the Alberta-based journal who accepted my story about old people, is closing its doors FOREVER, which means my poor story has no home. If you want to buy it from me, I can sell it to you. I think you'll like it, but then, it's tough to account for taste. I'm not sure I have good taste, either. Anyway. News number two is that The Windsor Review, who I never thought would publish me because Alistair Macleod was their fiction editor and I think he would really hate what I write, has picked up a short story of mine for their Best Under 35 issue. That sounds really impressive, right? Then, when you think about it, what it actually means is that they cut the submission pool drastically. Still. Sounds nice. 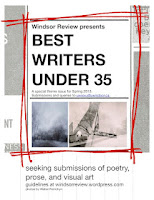 The story is called "Blindspots" and it's about a relationship between two people trying to have a baby, and the man has no functional sperm, so they need to go the way of artificial insemination. So good stuff. I should also mention that Spencer Gordon has some poems in it, even though he didn't mention I was in the issue too on his blog. He's great and I'm happy to be in there with him. Poet Mat Laport is also in it, but he doesn't have a web presence so I can't link you to him. He's also good. There's going to be a video of us reading eventually, so you'll be able to see me move and talk and be animate, instead of the faceless presence I am on this blog. Good! Good. Oh, and the latest issue of Riddle Fence is out and has a story of mine in it. Double-Oh is that I read the most recent volume of The Journey Prize Stories. They selected one of my stories awhile ago for their 22nd incarnation, and it was / is / remains an incredible honor. Anyway, in number 23, you should read two stories: Seyward Goodhand's "Fur Trader's Daughter," which only lives in print, and Michelle Winters' story "Toupee." It lives online here. Okay, that's all, that's it for now. Back to writing financial education manuals for me. xo
Posted by Andrew M. at 4:55 PM