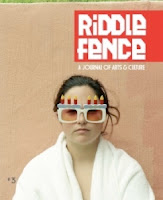 Well hello there. Some little bits of news to report. First, old standby "Eat Fist!", a well-travelled short story that originally appeared in Event, has been scooped up by the Body Electric anthology, put out by and/or Publishing. Nifty! More recently, Riddle Fence, a great great journal from out east, scooped up my short story, "Up, Away, Here, Gone," for their March 2012 issue. How do I know RF is great? They published Andrew Sullivan's slick short story, "Stray Dogs." So. Good stuff.

Not good? I missed my flight to Tampa today by not showing up early enough, and by having a disgusting passport. I had to switch my flight to an 8pm (later delayed to 10pm) shitshow to Orlando. My ride back to Tampa probably wants me dead. So does my bank account. The switch cost me $230 extra.

On the brightside, I wrote 5,000 words as punishment. And watched four episodes of Jersey Shore (spoiler: Vinny peaces out). Oh, and I started reading John Irving's new novel about a bisexual dude! I scammed an ARC. I sort of wish he would stop writing about sex with older women and characters who are writers.

Anyway. I'll be dressing like a pirate this weekend, as per Tampa's pirate festival. Good day.
Posted by Andrew M. at 5:31 PM