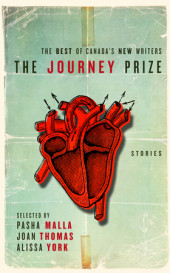 This year's incarnation of the Journey Prize Stories is out and can be purchased here. Do imbibe - there are some fantastic stories in here. Recommended reading: the story by Krista Foss. Great stuff.

What follows is an interview thingy I did for the National Post. You can find the original here.

The Journey Prize is one of the country’s most prestigious awards for young and emerging authors. The prize, which was endowed by the American author James A. Michener, who donated the royalties from the Canadian edition of his 1989 novel Journey, honours the best short story published in a Canadian literary journal each year. The award has served as a launching pad: past winners include Yann Martel, Alissa York, and Timothy Taylor.

Each year, the finalists are collected in The Journey Prize Stories. This year’s anthology, #22, was chosen by judges Pasha Malla, Joan Thomas, and Alissa York. While the three finalists for the $10,000 Journey Prize will be named on Wednesday, when the nominees for the Writers’ Trust Awards are revealed, we asked all of this year’s authors to answer a few questions about their craft.

When did you write it? How long did it take?

I wrote the story in parts three years ago. With editing, the process took about five months.

Eat Fist! grew out of three disparate, terribly flawed short stories. The first was a ten page narrative documenting my inability to master Ukrainian, the language of my forebears, and how incredibly depressing it feels to fall short of familial expectations. An old workout partner inspired the second story, which featured a lesbian bodybuilder and her attempts to whip a spindly-armed kid into shape. Finally, I always wanted to write something about comic books, so I worked on this whimsical story about a guy who falls in love with Wonder Woman and, predictably, has his heart broken.

While none of them were particularly good, they somehow joined forces to form the the story included in this year’s anthology.

Was it rejected by another literary journal before finding a home?

Event, the story’s eventual home, was the first (and only) literary journal I sent it to. I am grateful to Rick Maddocks and the Event team for their faith and guidance, and to Larry Garber for support.

My Husband’s Jump by Jessica Grant, a weird, wonderful account an Olympic skier who hits a jump and never lands. I’ve read the story a half-dozen times, trying to figure out how Grant takes an idea so ostensibly silly and transforms it into an affecting meditation on faith and the grandness of life’s mysteries. Saleema Nawaz’s My Three Girls is a close second.

The prize was made possible by James A. Michener; have you read his novel, Journey?

I have. Nothing beats a well-spun klondike yarn.

All of these stories were originally published in literary journals, most of which recently had their funding slashed. Why are these magazines vital to young writers?

Literary journals offer hope, professional editorial feedback, and – most importantly – a much audience for emerging writers. Moreover, I’d wager that the majority of Canada’s internationally-recognized literary writers cut their teeth by publishing in smaller magazines. For example, every single Canadian to win the Booker Prize published in literary journals before hitting it big, and early work by both of Canada’s Booker-nominees this year appeared in journals like The Fiddlehead and Event. More than half of the finalists for the Giller Prize have resumes that include publication in literary journals, too. Journals are, in short, a vital resource for writers, readers, and purveyors of Canadian culture.

William Faulkner prioritized writing forms thusly: “Maybe every novelist wants to write poetry first, finds he can’t and then tries the short story, which is the most demanding form after poetry. And failing at that, only then does he take up novel writing.” Do you agree or disagree, and why?

I hate to disagree with Big Bill, but I think elevating one form over another is silly. As someone who has tried, and failed, at all three, I can tell you that there’s nothing intrinsically more demanding about one than the other. You might enjoy working in a particular form, depending on temperament and taste, but each is, in my opinion, equally masochistic.

Give us an example of a perfect short story.

To me, it doesn’t get much better than Neil Smith’s Bang Crunch. The story follows Eepie Carpetrod, an eight year old girl with Fred Hoyle syndrome, as she ages a month daily until she’s so old she can barely walk. From there, the process reverses itself. I think the best stories contain the world in all its befuddling complexity, and Smith manages, in less than 12 pages, to say more about love, laughter, and loss than most novels.
Posted by Andrew M. at 6:44 PM