30 Second Review: An Exact Replica of a Figment of My Imagination 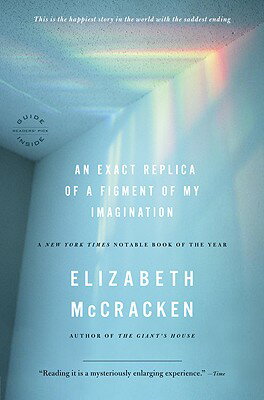 I like Elizabeth McCracken. I like her novel, Giant's House, and I really like her collection, Here's Your Hat What's Your Hurry?. Not surprisingly, I also like her new Oprah-endorsed - and wonderfully titled - memoir, An Exact Replica of a Figment of my Imagination. Or maybe surprisingly. The memoir is all about McCracken's first ill-fated pregnancy, and about its more successful sequel. There isn't much of a story here, in any traditional sense. McCracken and her husband temporarily christen their baby-in-waiting Pudding. Late in the pregnancy Pudding dies, so late that McCracken still needs to give birth. A year later she's pregnant again. It's not the kind of thing I'm usually interested in. Somehow, though, I fell in love - as I always do - with McCracken's wisdom. Did I say wisdom? I did. Know that I furrow my brows whenever someone describes an author or a piece of writing as 'wise.' But I can say without any kind of doubt that this book is wise. And funny. And sad. It seems to breathe life. I like that kind of thing. Here's a passage that eviscerated my cockles:

I put my hand on top of my stomach and felt what I thought of as Pudding's rolling-over-in-bed move. 'God, I feel better," I said. I exhaled. "All right. Well done, Pudding."

Later I found out that this was a Braxton Hicks contraction, my uterus puttering around, maybe getting ready for labor, maybe not. I found out, you see, because I continued to have them even after he was irrefutably dead.

More McCracken: http://www.elizabethmccracken.com/
Posted by Andrew M. at 7:50 AM